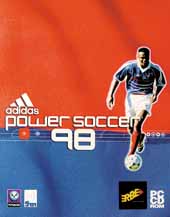 Adidas Power Soccer 98 is the fourth and final title in the Psygnosis series. Offering the classic mix of arcade and simulated gameplay from the previous games, this edition updates the game twelve different types of tournaments and cups, eleven international leagues, 120 national teams and about 30 different stadia to play in.

Aside from the classic gameplay players have different moves such as flick-passes, short dribbles, and sliding tackles. In both (arcade modes and simulation), there is a speed button that makes players run at an extreme and somewhat unrealistic speed. It is not entirely an advantage as using it widens the gap between the ball and the foot, leaving players wide open for tackles. Unlike similar games, there also isn't a way to scroll through the available players - the game automatically selects the player nearest to the ball.

The camera is dynamic and smoothly zooms in and out to give the best overview of the pitch. Multiplayer is available for up to four players through multitap. It was released in June of 1998 to coincide with the 1998 World Cup played in France at that time.