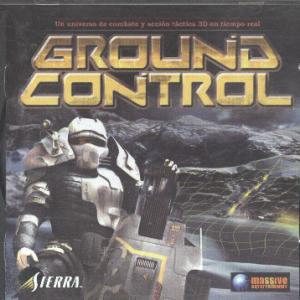 For Major Sarah Parker, the battle for Krig-7b was just another brushfire war in the long standing dispute between crayven Industries and the Order of the New Dawn . But this time it would be different...

Played out through two different campains in a gripping scenario, take command of customisable squads and become immersed in the virtual battlefield where front-line action and tactical planning are the Kings.

The year is 2419. Rival mega-corporations Crayven Corporation and the Order of the New Dawn use the overt force of their armies to acquire and hold resources in outlying colonies. You are selected to lead Crayven Corp. expeditionary forces to secure the resources of remote planet Krig-7b. The New Dawn have already occupied the planet, in an attempt to acquire a secret item of unknown, but unimaginable power. Your task is to prevent the New Dawn from unlocking this secret.

Ground Control is a real-time strategy game. Squads operate on a fully-three dimensional battlefield. Line of sight, ground cover and terrain advantage all come into play. Field commanders can easily zoom in and out from high vistas for a strategic view of the battlefield, all the way down to the detailed individual unit.

There is no harvesting or technology tree in the game. Players only have the squads available in the field that they deploy in dropships, with reinforcements available in limited supply. Resource management in the game is the use and defense of combat field squads, not of harvesters or builders. Units (managed in groups or squads) are divided between the Crayven Corporation and the Order of the New Dawn. Individual units are fully rendered and animated 3D models.

The Crayven Corporation tends to use more traditional squad types, such as tracked vehicles, that use explosive type weapons. For example, Crayven use the Armored Personnel Carrier with its field repair capability to assist in battlefield repair, and of course to deploy is effective 'Marine' Rifle Infantry. The light, medium, and heavy battlefield tanks (referred to as Terradynes) serve as the main Crayven offensive force, in addition to artillery squads. The Crayven will also deploy its airborne units (Aerodynes), such as the fighter, attack, or bomber class squads.

All told, players in service for the Crayven Corporation have fourteen unit types (four air units and ten ground unit types) available. New Dawn disciples will have also have fourteen squad types (eleven ground units and three air) at their disposal. Both armies have special weapons and equipment for each squad. The units for both corporations are available in the single player campaign. The first several missions are completed under the banner of the Crayven Corporation, using Crayven squads. Later, the player uses New Dawn squads to complete missions. Squads can be outfitted with numerous special weapons and equipment, such as tactical nuclear shells or deployable turrets.

Ground Control does not ship with 'skirmish' support. It is not possible to call up a game and play against Artificial Intelligence opponents on all multiplayer Ground Control maps. Cooperative play (multiplayer completion of the single player campaign) is also not supported. Another significant limitation is that the game does not have an in-game save feature.

Multiplayer gameplay is fast-paced, with emphasis on tactics. The game is the first real-time strategy (RTS) game featuring 'drop-in' support: Players may simply log in to a Ground Control drop-in game in progress, rapidly outfit their squads, and join in the combat. Gameplay types include traditional deathmatch, where players are awarded points for destroying enemy squads. The multiplayer also includes 'Scorezone,' and 'Flagzone' modes, where players are awarded for retaining control of strategic locations in the multiplayer arena. Teamplay is also fully supported, with up to eight players in a match.

Multiplayer supports LAN and internet play, both customizable. Hosts can set the technology level available, either restricting, or providing access to more advanced squads. Hosts may also adjust the overall damage level for all squads, ranging from 'wimpy' to the devastating 'Viking' damage setting. They may also adjust game score and time limits, map cycles, squad weapon and equipment loadout, and the availability/vitality of the APC.

In addition, the game comes with an (unsupported) map editor, GenEd, out of the box. GenEd, used by Massive Entertainment in production of Ground Control, is a tool for creation of single and multiplayer missions.