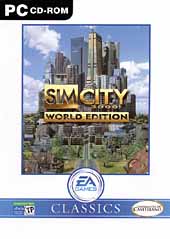 Perhaps the original "software toy", Sim City made a huge impact when it was released - so, no doubt transfixed by the thought of the seven million or so boxes the series has shifted, EA has released yet another update.

For those who have never played one of the Sim City games, we'll skip the tedious "where have you been for the last thirteen years" routine, and cut to the chase. You are cast as the mayor of a city - or a patch of soon-to-be-urban-sprawl fields - and via the tried and tested overhead forced perspective view, your task is to make a successful metropolis. 'Zoning', the process of allocating land for residential, commercial or industrial purposes, allows you to separate polluting factories from schools and hospitals. Roads, rail links and subway tunnels take your inhabitants, or 'Sims', to and from work. Adequate water and electricity supplies must be maintained if more people are to be attracted to your settlement. Airports and docks encourage new investment.

That, in essence, is the simple formula which has proved so lucrative for Maxis, developers of the series. Without any well-defined goals - other than to be successful - the player is encouraged to develop their own unique methods and playing style. The cynic will use taxation incentives to lure settlers to their residential districts, then, when they are comfortable and established, raise them to fill the city coffers. Environmentalists will jump at the chance to find out if cities can be made to thrive without roads or heavy industry. And sadists will delight in the range of disasters, from earthquakes to alien invasions, which can be inflicted on your faceless Sims. Over the years, the real-world setting and themes of the series made it especially popular with non-gamers.

So what has Maxis brought to this World Edition of the ageing Sim City 3000? Not much, is the answer. New European and Asian-style buildings, four new disasters and thirteen scenarios are the chief additions and, outside the game, utilities have been included to design your own buildings and scenarios.

If you ever watched the Berlin Wall fall on TV, and wished you had been the one to take the first chunk from the concrete, this game will give you the chance. One of the challenging and imaginative scenarios allows you to take control of a late-eighties Berlin, bring down the wall, and restore transport links while making sure the prosperity of the West spills over into the newly-united East. Another sees you preparing Seoul for the 2003 World Cup. The clearly-defined goals and short-term nature of these settings take Sim City beyond its usual software toy role, and into more traditional territory - a welcome change.

World Edition also brings fans the Scenario Editor, making it possible, via a fairly simple scripting language, to design your own scenarios. Maxis make a web-site area available for fans to exchange and download each other's creations, but whether anything as high quality as those shipped with the game will be created remains to be seen.

But other changes are sadly missing from World Edition - not a sequel, it is more of an extension of the preceding Sim City 3000. The ability to swap building graphics around is just a cosmetic change, with no real effect on the gameplay. The Building Editor is somewhat time-consuming, and may prove difficult for those not used to playing with Lego. Also, disappointingly, it is impossible to import your own graphics to replace the building walls - I dreamt of seeing my face plastered across the side of a skyscraper, like Carver in Tomorrow Never Dies, but it was not to be.

As technology moves on, so the conventional isometric graphics begin to date. In higher resolutions, the buildings look very blocky when the view is zoomed right in, and it is about time the concept was taken to proper 3D. Will we have to wait for Deep Red's highly promising Monopoly Tycoon to get down to street level with the proletariat? From EA's recent performance, it looks likely.