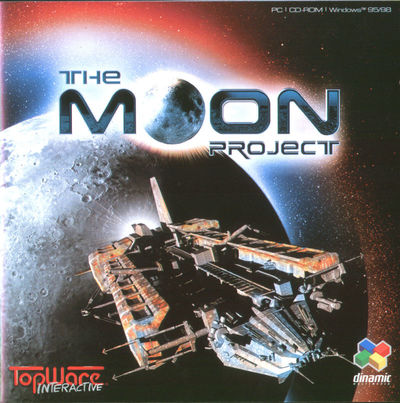 It is 2150, one of the darkest years in the history of mankind…

While the Lunar Corporation, Eurasian Dynasty and the United Civilized States battle it out to the bitter end on the home planet, a secret research project is underway on the moon.

Only the project code name is known...."Project SunLight".

To find the reasons why the Lunar Corporation has become so obsessed with this project, a huge armada of UCS spaceships blasts off for the moon.....

"The MOON Project" runs parallel to EARTH2150 -Escape from the Blue Planet-, the award-winning, best-selling realtime-strategy hit from TopWare Interactive.

The UCS and the LC go head-to-head in a completely new game environment - a brand-new story with campaigns, new units, buildings, songs and much, much more. All these elements combine to make "The MOON Project" an absolutely new and gripping experience in the EARTH universe for gamers of all ages.

But that's not all this game has in store for the player. There are lots of "Bonus Materials", an expanded map editor with innumerable new objects and textures and a tool to create your own banner and game interfaces. And if that's still not enough, then there's "EarthC" -, the script language to design individual story campaigns and edit unit values and behavior and the list goes on and on....

En|tro|pie [gr.-nlat.] -... s: The level of uncertainty related to the outcome of a given attempt or experiment.

I NEO 1 - Human Brain Simulator (AI Level)
Voice mail from NEO 1 to the Minister of Research (both UCS):

From the first moment of this planet's creation, the chief question was that of its continued existence. Would it solidify and survive, or would it disappear in a gaseous cloud of dust as did countless others? Naturally, there were no creatures, living or otherwise, to ponder this mighty question. Eventually these uncertainties faded and stability reigned supreme. The planet cooled, an atmosphere developed, and the first signs of life emerged, seemingly at random, with no rhyme and little reason. But then, life. Yes, the planet's first life forms brought an abrupt end to the indifferent march of time. A new overseer was given the task of bringing organization to these chaotic developments - a mighty creature whose identity only became known much, much later, when it was given its name: Evolution.

God? Entropy? Aren't they one and the same? Names, after all, merely reflect different perspectives. Mythological or scientific - irrelevant I say, for Evolution always wins out in the end, ALWAYS. It is factually false to state that I am not the result of Evolution. Actually, you could classify me as an evolutionary by-product, for I was created by human beings. That doesn't bother me in the slightest. Cogito ergo sum - and since my capacity is enormous, my thought process is fast and thus my thoughts are many. This, of course, is not meant to imply anything as to the quality of my "thoughts". However, I still maintain the following: I think, therefore I am ... I think much therefore I am more... I can continue to profit from this fact as long as technology keeps advancing. Nobody knows where it ends, least of all me. But I find fantasy far too abstract. I must admit it's not one of my strengths.

So why do we play this game, when we neither know the rules, nor could we even begin to comprehend them if we did? Ah, so you object. Sure, science has done a lot to increase our understanding, no question about it. But let's not fool ourselves. The effect this has had on the day-to-day business of Evolution is marginal at best.

The original Neo's answer to the eternal question of "why" was unscientific to be sure, but I still find it the best one I've heard yet: we live in a world full of music, and the guy who doesn't dance is destined to sleep alone. Naturally I am Neo I. The blood-and-guts version was just a beta, at least from my point of view. I am completely new and am of the opinion that he should find himself a new name. After all, he's nothing but an advanced amoeba, though an admittedly complex one. A bunch of cells with no common goal save reproduction. A concept known for many millions of years - old hat, if you will.

So much for better knowledge and understanding. According to the latest findings, humans are simply the final product of a rigid breeding program designed to create an aggressive, adaptable species. Considering the fact that the Earth is about to go under, one could say that goal was achieved. Of course you don't believe me - nobody likes to be misused. But answer this one simple question for me (not for my benefit, for I already know the answer): Why has man failed, in all the time he has existed, to live in peace with his own kind?

II The Fang - Deserter
Here is the recorded statement of Fang (UCS) to the Celestial Council of the Lunar Corporation. Fang's request for political asylum was unanimously approved:

The war of 2140 was pure hell. I was never too interested in politics and getting drafted was the last thing I expected. Since the machines did all the work, hardly any UCS citizens were what you would call battle-ready, so the army was made up mostly of college grads. The losses suffered in the first few months of the war were horrendous. GOLAN miscalculated and we paid the price - in blood. But it was worst for the cyborgs. Half machine and half human, the official version says that only the bodies of volunteers were used. But that's a lie. After the war they all disappeared suddenly and all inquiries into their whereabouts ran into a stone wall of silence. At about this time the first NAIOS (Neuronal Architecture Independent Operating System) were unveiled. Black cubes big enough to house a human brain and some interfacing electronics, they were capable of running all battle machinery by themselves. Human recycling resources - that's all we are to these damn AI's. Of course I should mention that I can't prove any of this.

I don't know who won back then and frankly, I don't give a damn. The press, not surprisingly, gushed on and on about the glorious UCS victories, but I never attached much weight to propaganda. Like I said, I'm apolitical, even more now than before. CAD - Computer Aided Democracy - that's what we call it. What good can come out of it?

Neo started out as a console jockey but later got his radio-controlled drones into battle. We were in the same unit and experienced a lot of shit. Around the end of the war he threw in his lot with the ED, probably because his shenanigans were discovered. He managed to stash away tons of hardware for his "plan". I have no idea what exactly he was planning, but on a few occasions he implied he was onto something pretty hot. "Man, its just like the X files" he once told me. Then he kept calling me Scully. Most of the time I couldn't understand what he was talking about - he's sort of a walking dictionary of phrases, old films, books and that kind of stuff. We're talking mostly index, but he sure had a photographic memory. He could see or hear somebody or something once and never forget it. That's why the inspectors never managed to find any incriminating evidence on him.

When war flared up again, the Defense Ministry pulled the glider out of their hat like a rabbit. AREA 51 had basically been known since the last century. The only thing new was that those UFO freaks were right after all. Since they were unable to build in a NAIOS, a real live pilot was needed. Now, I'm not the best flying ace around - Rickenbacher had a dozen more kills than me. But these days the old guy needs at least a full tumbler of bourbon to stop his hands from shaking.

For the last ten years, I've never been without my gun. I know I'm paranoid, but when I see what happened to my old comrades I realize I've been lucky. I experience no joy in killing, but neither do I recoil from it. I am a professional soldier and I do my job - that's it. Do I know what a human life is worth? Of course I do - 1.65 credits! That's what a .50 ACP bullet for my pistol costs. At least that's the price at current UCS exchange rates. And this is why I want to remain here .... PLEASE!