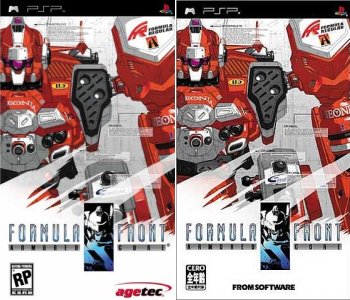 From Software developed the PS2 version simultaneously with the first PSP installment. The two versions of the game will allow for data transfer via USB, letting players exchange mech data between the PSP and PS2. Formula Front is a pure simulation spin on the Armored Core series where players modify their mechs but don't directly control them in battle. To this, the game adds a new AI battle feature where customized mechs battle using artificial intelligence rather than direct player input so this time around, strategy will be more important than action. Matches are setup against other AI AC's, run without player intervention and rely purely on the player's prior competence at AC and AI customisation.