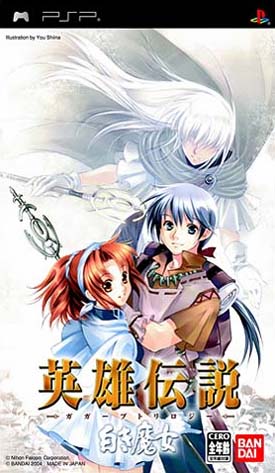 Gagharv Trilogy (Eiyuu Densetsu Gagharv Trilogy: Shiroki Majo at Japan) is a PSP conversion of Falcom's Japanese PC RPG of the same name. You'll be cast in the role of a young boy named Jurio and you'll set off on an adventure with your friend Chris, a red-haired girl who you've grown up with. Your adventure will have a modest beginning, as these adventures usually do, and it will initially revolve around the village where you live. The first segment of the game is essentially a prologue that sets up events for the proper adventure. You'll be introduced to the main members of the cast and filled in on the basic gameplay mechanics. Once you get under way in the first chapter, you'll head out on an adventure that spans eight distinct countries as you follow the footsteps of a great witch. Your quest takes place on a continent called Tirasweel, and the Gagharv from the title is the name of an enormous chasm that separates the continent from the rest of the world.

The gameplay mechanics in Gagharv Trilogy cover the old-school bases you'd expect out of an RPG. You won't find many of the newfangled conventions seen in Gagharv Trilogy's systems. The action will unfold from an overhead view that will help keep you aware of your surroundings. Your time will be split between exploration, puzzle-solving, and combat. Exploration will send you talking to various non-player characters to get information on where to go and what to do. You'll also be given the option to visit the local shops to buy better items for your crew or stock up on items to use in battle. You'll also be able to look for items you can use in your adventures.

The puzzle-solving aspects we've seen aren't too hard at the moment. You'll use the information you've gleaned from talking to folks to find items or learn the answers to questions when asked. Combat is a turn-based and real-time hybrid. Your enemies are visible onscreen, and thought bubbles that appear above their heads will clue you in on their states of aggression (you initiate combat by walking into them). When a fight starts, you are given the choice to either have the members of your party attack or have them wait. Once you've made your choice, the battle will play out automatically before your eyes as the members of your party attack or hang back. You can choose to hop in at any time and modify your decision by having a party member perform a power attack (if his or her meter is charged up), cast a spell, or use an item. Once that member has performed the action, he or she will return to attacking until your enemy goes down.