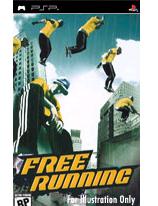 Free Running is an urban environment sport also known as Parkour where the goal is to be free, break boundaries and go where others dare not go. In this game, the world around you becomes your playground, where you jump, climb and leap to victory. Explore the rooftops of London and its environments: Inner City, Dockland and Council Estate. Multiple game modes include: Free Race, Race 'n Chase, Time Attack, Free Style, Target Hit. Master over 40 different moves, and customize your character with Adidas clothing. Play on your own or against your friends using WiFi technology.