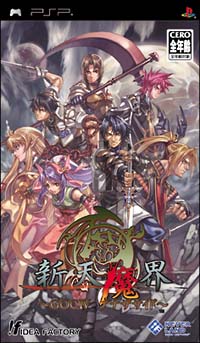 Generation of Chaos, released in Japan as New Demon World: GOCIV Another Side (新天魔界 ～ＧＯＣIV アナザサイド～ Shin Tenmakai ~GOCIV Anaza Saido~) is a turn-based strategy RPG fantasy video game released for the PlayStation Portable, developed by Idea Factory and published in the U.S. by NIS America. NIS America released the game in the U.S. on February 28, 2006. An Android port of the title, developed by HyperDevbox Game Studio, was released on Q4 2011.

The game is the fourth in a series of Generation of Chaos games, the fifth one having already been released in July 2007 in Japan for the PlayStation 2. Generation of Chaos is also part of a label called Neverland, which includes other Idea Factory games such as Spectral Souls.

When mortal existence was still in its infancy, the Gods waged a terrible war for their souls. Fighting to the death, they created ultimate weapons of Armageddon, the Dragon Kings, whose roars could be heard across thousands of leagues, and destructive power, ultimately, caused the extinction of the Gods themselves.

That is the legend passed down since ancient times. People feared the beings called Dragons, and revered them.

The Dravanian Revolution ended in 1701, leaving the country in ruins. In the wake of this chaos, Minister Zeo deftly maneuvered through the political system to emerge as the country’s strong new leader. Before long, Zeo began to transform Dravania into a powerful military force. Now, Dravania has risen from the ashes to restore peace and prosperity to the rest of Lost Grounds.