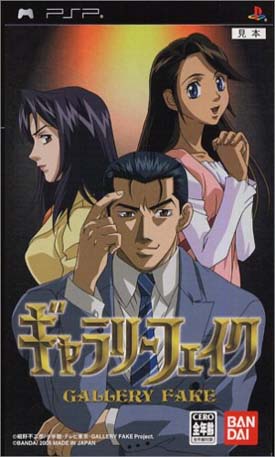 Gallery Fake is a graphic adventure game for the PSP based on a popular anime. Players take on the role of Reiji Fujita, the former curator of the New York Metropolitan Museum of Art, and now the owner of a gallery known as Gallery Fake. Reiji is drawn into a mystery surrounding a few pieces of artwork, and must find the truth via a series of conversations. Players can collect information by manipulating conversations and "negotiating" with characters. Quick thinking and timing are needed to identify when someone says something "fake." Plus, when certain pieces of information are gleamed, it can be used as ammunition to confront other characters!