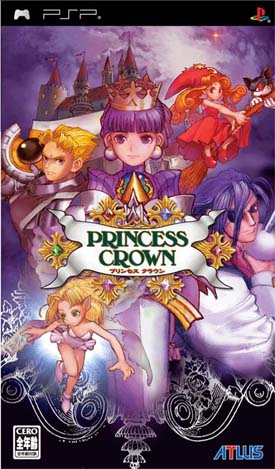 Princess Crown is now portable! The classic 2D RPG action title for the Sega Saturn is back after an eight-year break, only now it's on the PSP. Following her mother's death, Princess Gradriel ascends the throne, but quickly grows fed up with the formalities of palace life. She decides to take flight of the castle, and tours the kingdom in order to discover the problems of her people with her own eyes. But Gradriel's journey leads to an unexpected adventure, where she meets numerous sidekicks, travels through time, and ultimately fights an evil that threatens to destroy the world!

The handheld version of Princess Crown plays just like its Saturn predecessor, with intuitive controls that allow the player to perform numerous attacks and combos. Bonuses include a Gallery Mode, which lets the player view the game's over 15,000 CG pictures, as well as enjoy the game's stirring musical score.