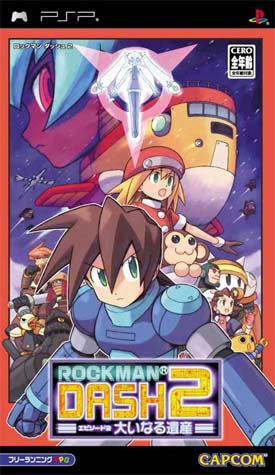 Mega Man Legends 2, known in Japan as Rockman DASH 2 - Episode 2: Great Inheritance (ロックマンDASH 2 エピソード２ 大いなる遺産 Rokkuman Dasshu Tsū Episōdo Tsū Ooinaru Isan), is an action-adventure game released by Capcom in 2000, acting as a sequel to Mega Man Legends. The game features Mega Man Volnutt's quest to find four keys hidden in the planet in order to aid in the search of the Mother Lode, a legendary treasure thought to be an infinite energy source.

The gameplay in Mega Man Legends 2 is very similar to that of its predecessor and has a few changes. The player controls the protagonist Mega Man Volnutt in his explorations through ruins and fights against Reaverbots. The ruins, however, are from various islands in contrast to the prequel in which most ruins belonged to Kattelox Island. The player is able to travel to other islands with Roll's ship, the Flutter, although he can only enter certain islands by completing different missions. Unlike Mega Man Legends in which the player could enter to different ruins by having the approval of Kattelox's mayor, here the player must pass different tests in order to win Digger licenses from a specific level. The license allows Mega Man to enter into ruins which are forbidden to lower-class Diggers. Additionally, when winning a license, the Reaverbots' health is higher, but once they are destroyed, they drop more refractors' shards which are used in shops to buy items. Mega Man's interactions with other characters can also affect the character's state depending whether he is good with other people or makes them angry. Mega Man is also able to grab objects or people which help the player to complete missions. Mega Man can also suffer from special damage when fighting Reaverbots or touching fields that damage him such as lava. If the player equips Mega Man specific body part, he will become invulnerable to such states. Another addition is the underwater dungeon, in where the objects' weight is reduced and Mega Man can jump higher. The energy of the special weapons, which are developed by Roll using unusable items, are now shown in two energy bars, one green and one blue. The blue bar indicates how much energy the weapon has, while the green bar shows how much energy is consumed when the weapon is used.