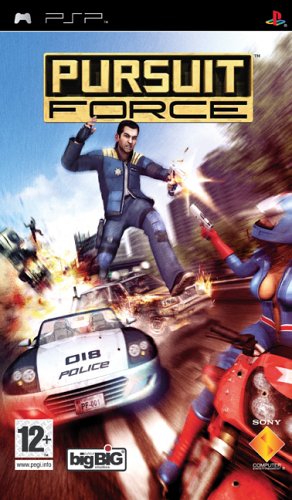 Pursuit Force sees a time where rising crime and mounting gang tensions make Capital City's streets a dangerous place. Meeting the hardened criminals with force is the job of a new type of cop working for the Pursuit Force team, an elite police division where the ends justify the means. Set across five districts controlled by violent criminals, Pursuit Force features more than 30 cases to crack in a non-stop festival of speed. The action takes place across an entire fictional American state, as the law gets tough on a new breed of gangs.

As a young, cocky and street tough cop, the player is tasked with bringing to justice five of the State's most infamous gangs, including the Vixens, a foxy group of ex-stunt girls who chose a life of crime to pay for their daring Hollywood lifestyles and outfits. Trained in martial arts, weapons design and death-defying stunts, the Vixens are hell-bent on living the high-life that Hollywood denied them. Led by Whiplash and The Fox, the sexy Vixens are a deadly combination of strategy and style.

Assisted by the old-school, short-tempered Chief of the Pursuit Force who likes to play by the book, players find themselves immersed in an adrenaline fuelled, high speed chase across 400km of city streets, freeways and off-road tracks, in their battle to outsmart the bad guys and rid the state of crime.

When ground assaults are unfeasible, take to the skies and man the Pursuit Force chopper, a prototype assault vehicle. Housing the latest mini gun technology and capable of firing 600 rounds per minute, shredding targets to devastating effect, this machine is specially designed for effective urban warfare. Combining the latest carbon fibre armour technology with high speed and excellent maneuverability, the helicopter team's remit is to provide support to the cop on the ground and in the air.

Whether jumping between high speed cars and helicopters or chasing down the foxy Vixens, Killer 66 or other hardened criminals, Pursuit Force takes justice into its own hands, setting a new standard for action, gameplay and graphics on the PSP.