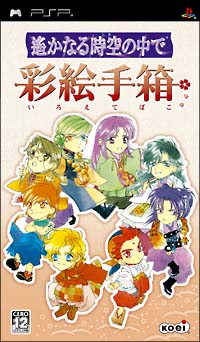 Harukanaru Toki no Naka de Iroetebako (遙かなる時空の中で 彩絵手箱, Iroetebako roughly translated as "Treasure Trove of Art") is the first PSP Haruka game. Like the subtitle states, it is mainly a portable gallery collection. Like Hachiyoushou, it was created to promote the series's TV animated series.

A puzzle mini-game is added to the package. The objective of this game is to match at least three identical tiles from a dropping column of tiles. Tiles disappear when duplicates of the Five Elements are matched and sometimes cause chain reactions. The player can select one of the Eight Guardians to act as their cheerleader. His messages will change as the player's avatar levels up in the endless game. Spoken messages are unlocked at higher levels or by maxing out his Intimacy rating at the bottom of the screen. Players cannot pause or save their progress.